Click here to go to this problem in uva Online Judge.

The problem is straight forward. Given an input n, there will be 2n lines of input. Since each line also has accompanying next line. They are divided in first and second line. Here only first line is required for calculation. The second line is the output of the program.

Then we will be given say m lines. For each lines we are to match the first lines from previous 2n lines and output the second line.

There are easier ways to solve this, but this mainly a KMP ( Knuth Morris Pratt ) algorithm tutorial.

Here the input is “jalo re jalo” which is one the inputs from the problem. The state diagrams are first drawn without following the algorithm. After that DFA table from hand tracing and code output is matched.

Why most states transition back to state 1 on ‘j’ input? Reaching state 1 means ‘j’ is already matched so going back to 0 will produce wrong output. Because that’d mean two j matched or “jj”. Since ‘a’ is after ‘j’ the next task is to match ‘a’ so we go back to state 1 and try to match further inputs.

Notice on state 8 on input of ‘j’ it goes to 9 instead of 1. Because that ‘j’ is also a part of the seqence and the seqence hasn’t broken yet. Finally on state 12 or on the length of the pattern string the input gets is accepted.

DFA table is generated with pattern being one of the input from the problem.
“jalo re jalo”

Input is the same string as above.

Note empty cells in the matrix contains zero. They are not shown to keep it simple here but they are there and they transition to start or beginning state which is 0.

This is the initial state of the DFA matrix. 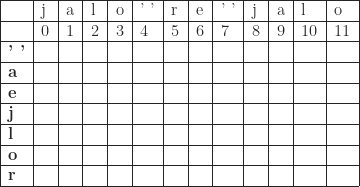 Setting up the next state:

This is execution of line 53 in code below.

Here the pattern is,

This essentially means in the j-th row and 0-th column set 1.

To understand the how the transitions work column wise lay the pattern. So if the length of pattern is m then there are m columns in the matrix. In row wise layout the set of character in the pattern. So even if there are multiple occurrence of the same character it is only represented as a row once.

By careful inspection of the DFA matrix it can be observed that state change occur when the character in that row matches the column representation of that character.

The row index is represented by the ASCII value of the set of characters in pattern. The column are represented from 0 to m where m is length of the pattern. 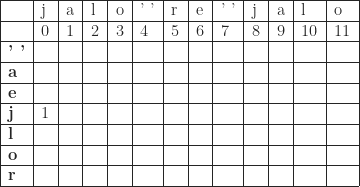 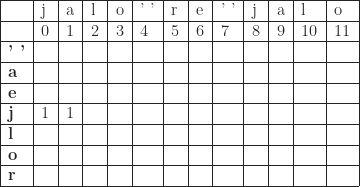 Updating the next state and Column to to copy from:

This replaces the matching row and column matching character cell with value of next state which is the next column number.

Update x the column number where to copy values from. This means if in the pattern recognition we go back in a previous state then we don’t need to recalculate. Since the transitions in that state are already calculated use those same transitions. 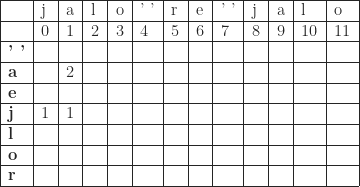 It already stated there which state to go for on which input.
So x becomes 1. Now in the next iteration values from 1-st column will be copied. 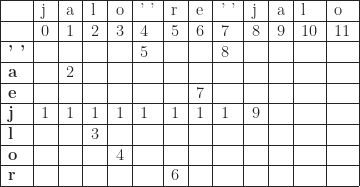 Final State of the DFA table or Matrix:

Similarly follwoing the procedure of copying x-th column, then updating matching character cell to next to next state or index and finally updating x to be the value at current character row and x th column we get this DFA table. 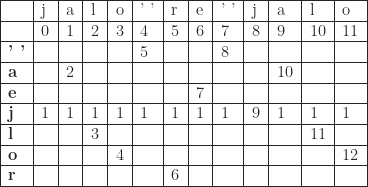 Execution of line 34, 35. Here i seem to have calculated length of pattern twice. This not a problem but doing extra work.

After the DFA matrix is generated. Next apply the given query string to the matrix and see if by transition it is able reach the last state which is length of the DFA string.

Important:  Be sure to add or print a new line after each output unless otherwise specified. The outputs should match exactly because sometimes even a space character causes the answer to be marked as wrong answer. Please compile with c++ compiler as some of my codes are in c and some in c++.